Hey Guys and Gals thanks for checking out my Mach 1 I sadly have for sale. The story of this car isn’t your typical story but I will do my best to share what I know. I originally purchased the car for myself and had every intention of keeping it. I love the Azure Mach’s and will hopefully be in a position to own another some day. Very typical story of finances force a sale. I will be as transparent as possible about every detail as that is the type of person I am. On to the car:


2004 Mach 1 40th Anniversary Azure Blue with 5 Spd; I purchased this car on May 23, 2013 from its second owner. The person I purchased it from bought the car in April 2008 and was a ChP officer in central California. He was injured and deemed unable to perform his duties thus retired from the life of law enforcement in California and moved to central Oregon, Mach 1 in tow. He made several trips with the car back and forth while moving thus adding up some highway miles rather quickly which are in turn much better than around town mileage. While in Oregon he had a failed water pump on the freeway and continued to drive the car around 20 miles until the engine seized. Subsequently, the car sat for 3 years until the unfortunate event of his brothers passing. He needed money to pay for funeral costs, thus the car went up for sale and I purchased it.


I decided to rebuild the factory engine rather than do a swap in the interest of keeping it all numbers matching and original. Call me a purist, but I didn’t want to de-Mach this at all, in fact, quite the opposite. I had the engine rebuilt at a professional shop and have receipts to show. Full professional machining was done as well including boring and honing cylinders, line boring, crank journals polished, check block deck for trueness, balanced with flywheel, crank pulley and clutch etc. Not a step skipped. The heads were also rebuilt completely as per the overheat scenario. Valve seats honed, chambers water tested, valve guide seals replaced, decked for flat surface etc. All of the parts I purchased were from Tousley Ford, Summit racing and a single fel pro gasket order from amazon. I attempted to replace all parts with OEM and the only reason I had to order pistons and rings from Summit was due to Ford not carrying .030 over pistons/rings. The cams were all inspected at Oregon Cam Grinder to ensure lobes were within specs. Journals were polished as well.


Total Cost of replacement parts and labor to rebuild the engine: $3,214.34 and of course there is around $100 in miscellaneous costs I didn’t include such as oil, filters, coolant and o rings. The car as it sits now has 60 miles on the rebuilt engine and is running like a dream. The mechanic inspected the trans and rear end and both were said to be in tip top shape. The current mileage on the body is 137,000 but I will let the pictures do the talking as to the shape of the car. For someone who is scared by numbers alone this might not be the car for you. Many who have passed by this car and those who are in the hobby alike have all commented it looks like a car with MAYBE 30,000 miles on it. I have spent countless evenings after work and weekends detailing the Mach, paint chip repair (there were 4) and going over every nook and cranny. I would rate this car a 9.5 overall and for someone like me that is saying quite a bit.


Without further adieux, the car:

Clean OR title in hand. The car is located in the Portland, OR area. The last Mustang I sold shipped to Odessa, TX so I am familiar with this process if needs be and am willing to work with a buyer on this. I am asking $14,900 OBO as this is once again a very good-looking Mach 1 in overall very good shape in a highly desired color WITH A BRAND NEW ENGINE. Lowball offers will be ignored, any reasonable offers will not. Mach 1 aficionados know what this car is worth and the value of having one with a brand new life. This is as close as it gets to purchasing a new 2004 Mach 1 in 2014 considering all the new heart and attention to detail its had from me. Do not hesitate to shoot me a message or give me a call/text at five oh 3-7 oh nine-3333. Additional picture requests are fine but I do work a typical work week and the car is nestled in my garage. I will get to them as quickly as possible. Name is Justin. 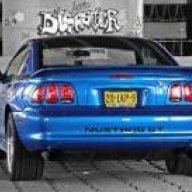 Thank you, I appreciate it!

Ha you and me both! I had some good plans for this car but then life :undecided: 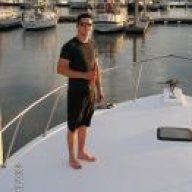 Gonna have to bring that price down. A lot. Beautiful car though. Glws. Hope you get what you want! 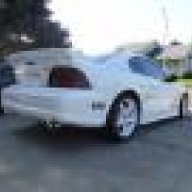 I have seen this car in person, and also know the person whom built it, no disappointments !
F

Saleenster said:
I have seen this car in person, and also know the person whom built it, no disappointments !
Click to expand... 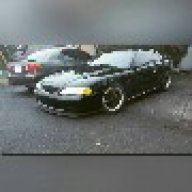 Have not sold yet huh

ademily87 said:
Gonna have to bring that price down. A lot. Beautiful car though. Glws. Hope you get what you want!
Click to expand...

Agreed that's what the low mile 35k ones are going for around here.
Others are bringing between 5 (rebuilt title) to about 10 with a normal clean title with those miles.

Good luck though hope you pull it out.
You must log in or register to reply here.