I didn't know what else to title this but I didn't want to clog up Brett and Pete's brake thread. I'm highly highly interested in doing the swap myself. A co worker of mine has been working vigorously on making his own brackets and I'll pass the info on to him tomorrow. My question is what wheels would you run with the big huge brakes? I want to keep the rear wheel nice and small, maybe drop down to a 15 even and run a 295/50/15... But nobody makes freakin 18 wheels that makes the 15 wheels. What setups would/do you guys run that run your cars hard with high power?

Truthfully I wouldn't be objected to running 18's all the way around and having 15's for the track with slicks... But I don't know many people that have high hp - and traction - on 18's. I run a nt05r on my 17's with ~260hp and under the right attempt I can burn those things through first, anything beyond that tho is just a chirp if I'm lucky (zero complaints about that. I prefer to hook and go instead of sitting there putting on a smoke show.) I can only imagine with ~800 it would just be ugly if I'm not careful.... Street traction is an absolute essential thing for me

EDIT: I have a 98 cobra rear end in my car, meaning shorter axles, but free cobra brakes! I'm running fat spacers to put the wheels where they belong. If I can find an offset to eliminate those spacers thaaaaat'd be great
You must log in or register to reply here.

Save on Brake Kits at RockAuto 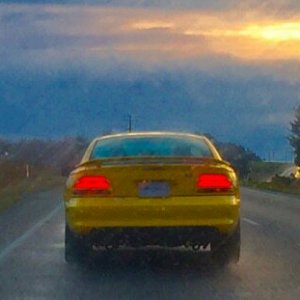