I've been debating for a while if I should keep track of my truck build on here. I have more friends here than the truck forums I'm in and I'm sure you guys will appreciate the work I have put into it. And seeing that there is everything from Subarus to Jeeps on here another Ford won't be out of place (not knocking you other guys, rock on lol). Here's a little background on it:

My dad bought it new in December of 92 (rhyme). It's a 93 XL, 2wd, 4.9L with 5 speed. It was originally charcoal grey, with silver painted wheels and front bumper, and a white diamond plate work-truck rear bumper. A few years after he got it, a guy who detailed it ruined the clearcoat, so for the next probably 10 years of its life it was a flat grey color and just became an all-purpose truck...hunting, fishing, work/haul, etc. When I became old enough to learn how to drive, it became mine, and I was instantly bitten by the mod bug. The truck had remained mostly stock throughout most of its life. I had dreams of repainting it back the original color and one day swapping a different motor in it. Over the next couple years I got to learn a lot about vehciles through that truck, and had my first wreck also...a small fender bender in which i busted a headlight and my grille. I worked to replace the grille and headlights but still wanted more. We didn't have the money to pay a body shop to do all the work, so dad told me I needed to learn a little about sanding and body work. I spent a ton of time wet sanding it and finally got a buddy of mine from the body shop to come to my house and prime it for me. At that point I was still in high school and still trying to convince my dad to let me lower it, which he was strongly against. After graduating and saving up money from work, I was finally able to win my old man over. Up until that point the only thing he let me change was an aftermarket CD player and a set of chrome stock rims and roll pan. I started with a Belltech flip kit, shackles and air shocks, and by then had also changed to a set of Cragar SS wheels. The factory bench seat later got ditched for a set of Eddie Bauer buckets with center jump seat. The front finally came down with a set of Belltech I-beams and cut factory coils. The front changed to a Carriage Works cut out billet grille, smoothie bumper with fog lights, clear headlights, and a Cervinni's ram air hood. Shortly into my first year out of school, I made a rookie mistake and let the truck overheat, resulting in a blown head gasket. Out came the old straight six for an overhaul. Really wish I had spent some more time on that but I'll get to that later. After that I drove the truck every day until February of 2011 when I upgraded to my 08, and since then I have only driven it a handful of times . I know I left out a few details but that's the basics of this project.

My goals of the truck have always been pretty simple: Slam it on its face, get a nice set of wheels and a fresh paint job, and one day put a V8 in it. Lately more and more of my friends have been asking why I don't drive it and urging me to get it back on the road, and it's finally gotten to me enough to light the fire under my ass that I needed for a while! My upcoming plans for the truck are to finally get my Lightning wheels on, get it back running, and do a little clean up under the hood. When we rebuilt the 6'er, we were in a rush to get me back on the road and didnt spend any time on making it look better under the hood. I plan on taking the intake back off and repainting it and all of my accessory brackets, cleaning up some vacuum lines and wires, and repainting the fenders and firewall, then start working on repainting the rest of the truck (finally).

Hope you guys will like it, as it's kind of an eye sore even I'll admit...white hood, black bumper, grey grill, primered body, etc. lol. I'll get some pics up in the next post, as well as a list of mods.
OP
OP

Didn't feel like splicing in a sentence between every photo lol so here we go. Those pics are about 6 years old. It no longer has the Cragars, or the ridiculous sticker on the back, although the name stayed with it. Also the euro tail lights are long gone along with the chrome grille and headlight trim. The last picture above is actually the most up to date. As soon as I can get my car outta the way, the truck is going into my shop to have some major work done on it that's been needed for a while. As I mentioned above, there's a lot of work to be done under the hood. I also have a set of Belltech 2" drop coils, radius arm bushings, and ball joints all waiting to go on. I'll also be pulling the bed back off to clean up the frame and give it a good undercoating. Last year I purchased a set of Gen2 Lightning wheels for it. Friday I dropped them off at a machine shop to have the stud holes drilled out to fit (yes this sounds crazy, but yes it does work absolutely fine) and I should have them back tomorrow. Next on the list will be figuring out what size tires I can run under it.

Once again hope you guys enjoy and I'll update this as more work is done...just wanted to go ahead and get it up here since I've been waiting to do it for a while now.
OP
OP

Thanks Orange! They were kind of a spontaneous high school thing, they're long gone now though.
This picture is as close to my goal of my truck as I can find, minus the ghetto wheels and lights behind the grille. I'll also have smoked headlights in mine. 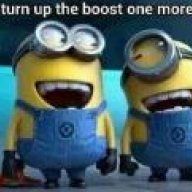 looks good. I didnt care for the taillights, so glad those are gone. im going drop mine, but on bags. ill be tagging along on this buld.
OP
OP

Suspect said:
looks good. I didnt care for the taillights, so glad those are gone. im going drop mine, but on bags. ill be tagging along on this buld.
Click to expand...

Thanks man! After seeing your black truck I know the white one will look awesome! I'm ready to see pics of it as well.
Here are the Lightning wheels I mentioned: 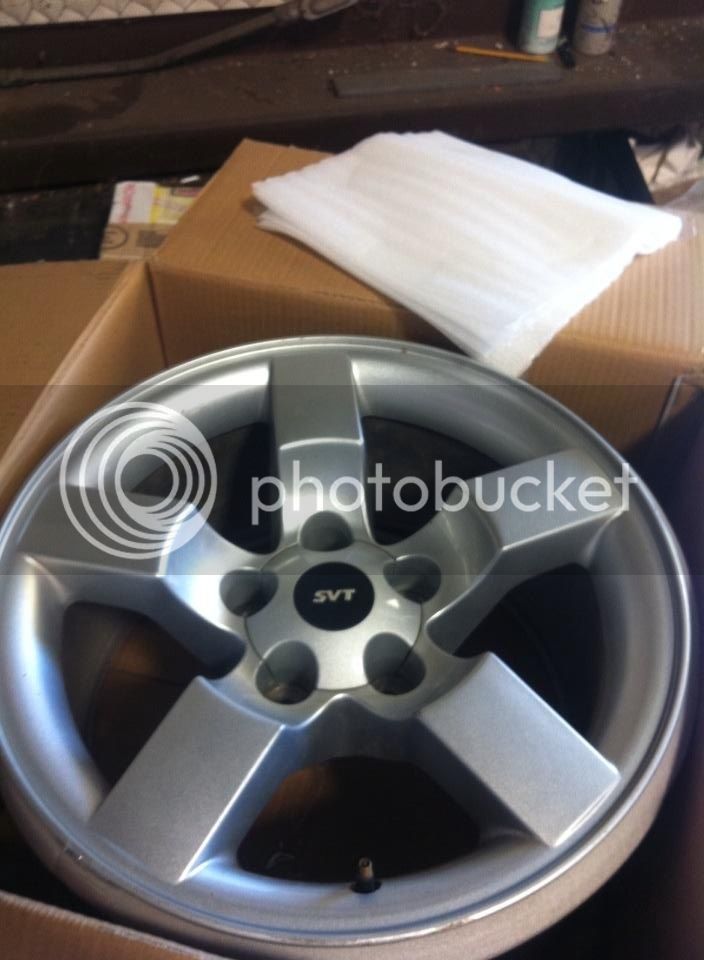 And the most current pic of the truck showing off the grille and bumper: 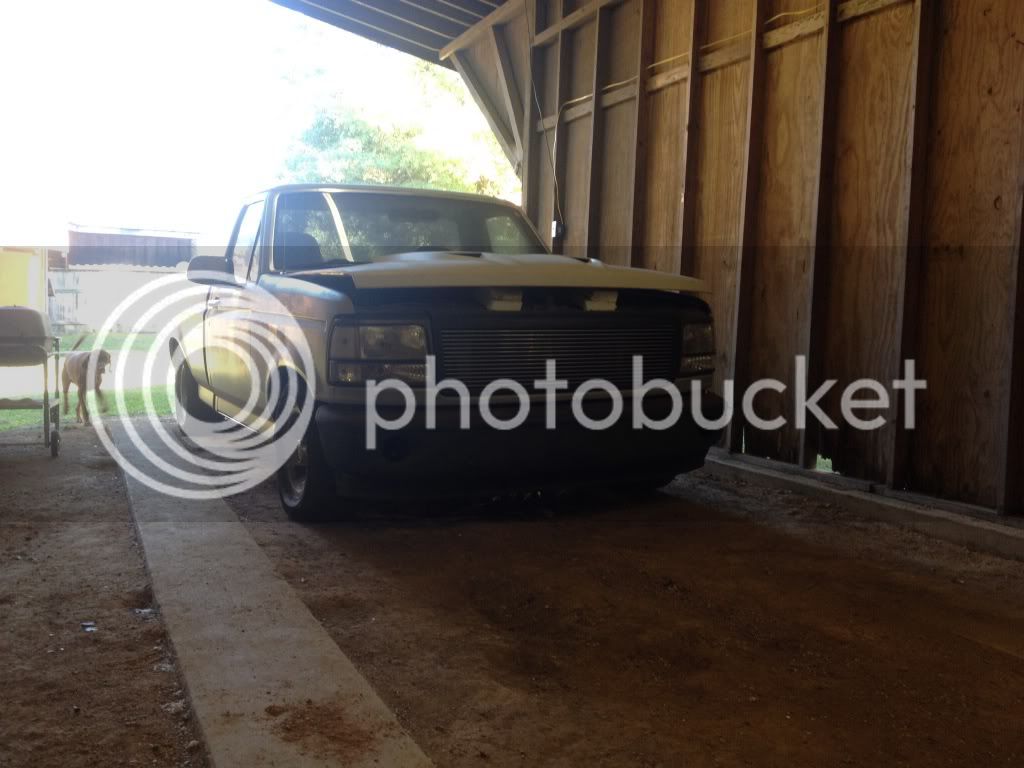 those wheels look clean!! my 03s will need some tlc and then powdercoat.
OP
OP

They were in extremely good shape to begin with but I do plan on getting them powdercoated in the future also. 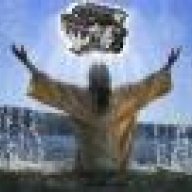 This evening I got a couple friends to cone help me get the truck in my shop since it won't run right now. It was in the shed beside my shop, in front of the mustang. So therefore we had to roll the car out first, then the truck, then maneuver the truck back and forth between the big shop and my oddly placed smaller shop in the middle of the yard. Took a while but we got it lined up with the doors but still couldn't roll it up the ramps into the shop. So here was our solution:

We wrapped a chain around the rafters, hooked a chainfall to it and to the lift point on the front of the engine, and as I took up slack on the chainfall, the other two guys kept pushing against the back to relieve some stress on the chain setup. We finally got it in though! This weekend I plan on dropping my fuel tank and cleaning/painting it, and cutting off my old unused exhaust hangers and getting the frame nice and clean and ready to be undercoated....again. Then I'll move on towards the engine bay cleanup and front suspension revival!
OP
OP

Finally got my wheels back from the machine shop today and couldn't wait to stick one on and see how they looked!

I'm loving it! They fit great also! Thanks to [MENTION=8033]Suspect[/MENTION] for helping me track down the lug nuts I needed also! As soon as I can figure out what size tires I can run, and buy them, these will be on here to stay! (Atleast until I decide to have them powdercoated) Next step I'm gonna begin working on this weekend is cleaning the frame up and spraying it with some rubber undercoating. It's gonna take a while to clean with a grinder and brush but it'll be worth it. I'm also going to replace the u joints most likely since I already have easy access to them before putting the bed back on. Thanks to those who have checked this out and once again hope you all like it!

That's what I had in mind for the rear, and a 275/40 for the front. That's what this truck is running and the stance looks pretty great! And it's just about the same height as mine too.

Such a great looking truck.

thats my truck before I owned it. charles had it slammed! he use to post here. I traded a 95 gt for it.. long long long time ago. I got rid of all the marble in the paint and basically changed it all together. just wasnt dd friendly.
OP
OP

Man that's crazy! The first time I saw a pic of your black truck I thought 'I wonder if that's Charles' truck from nloc?' I would have gotten rid of the marble too, just not my thing. Other than that it looked amazing! I envy you and all of your Lightning ownership lol! I bet that one was fun to drive too!

lol. yup! i wanted the truck for awhile then one day he decided to trade.. i jumped all over it. wasnt as strong as i thought it would be, but once it got rebuilt and i threw some parts on it.. it felt alot stronger. and thats what pretty much made me sell my 331 and get into a 408 in my mustang.
B

It's crazy to me that more often than you would think, people spend a ton of time and money into a project then just let it go. A friend of mine recently traded his very clean 89 chevy truck with LT1 and T56 for a procharged coyote with all harness/computer etc. I guess I'm just more attached to my truck than that, I would let it rot to the ground before I sold it. Hopefully one day in the future I can finally put something like a 4valve or a 408 or something in it.
OP
OP

Burninriverdiver said:
Good choice on the wheels!
Click to expand...

Thanks! I waited a looooong time to find a set of em! Exactly a year after I bought them and had em in my shop attic, another set popped up for sale about 30 miles from me, for WAY cheaper than what I paid, LOL. Oh well though these are here to stay now!
You must log in or register to reply here. 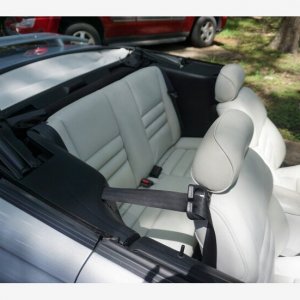 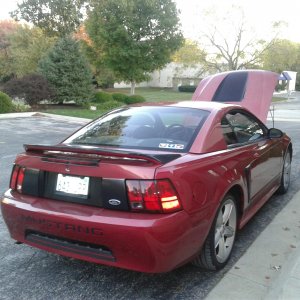 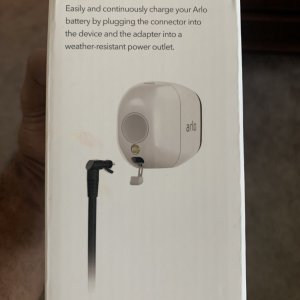