I'll preface this with "It's my car, I'll work on it my way"

Recently I bought an older direct-fit 2 core all aluminum radiator for my '94. Finally got around to installing it this past weekend.

Now, my '94 is close to stock, and has accumulated a total of 240,000 miles in its life, with the past 5 years mostly sitting still as a "secondary car/toy" I've beat on it hard in its life and it's never severely let me down.

Since '08 I've noticed my car ran "hotter" than normal, and beating on it made the temps rise rapidly. I had made no changes in the way I drove the car before I noticed it running hotter. Did a radiator flush and got loads of sediment out of the system from the hard water around here (probably from when I replaced the radiator the first time when I first got it) and the coolant was murky brown/green color. I've kept it close to home to prevent a full on overheat. I replace the thermostat and radiator cap and it got significantly better, but I've always want to put a larger radiator in it anyway. I suspected that the head gaskets may be weeping a little, causing the discoloration of the coolant, but my oil looks fine.

So sunday I decided it was nice enough outside to finally to do the radiator. I've been trying to air the car out on nice days from my mouse hunt experience, and so I cracked the windows and went to work.

Getting the old one out was cake. Coolant looked nasty as I suspected.

Was kind of a pain to slip the new radiator in there w/ my A/C hoses and my ABS pump bracket still in their original places. But alas, after loosening the ABS bracket, and a well placed screwdriver to pry with, the radiator went in like it was meant to. Made some minor adjustments for fitment, and threw the car back together.

Filled the radiator with new mixed coolant and fired it up, let it burp for some time, filled the reservoir again, and it was happy.

Took it out for a little spin, and I immediately saw a difference in coolant temps. This could be just the fact that I went from driving my daily driver 4x4 ranger pig, or maybe its because it could run cooler, or maybe my old radiator was soo darn clogged from sediment that the coolant couldn't move thru it.. but it felt faster! Either way, I don't know.

But anyway, I think it went well. And for a 240,000 mile 5.0 I'm pretty happy with it. Yes, it probably needs a coolant pressure test, and yes, it probably needs head gaskets.. but that's another job for another day. So long as the oil is clean she'll stay together.. which isn't bad for an engine with that kind of mileage that's never been opened up.

That's great to get that many miles out of a motor that's never been torn into! Hope it stays that good to you for a while! 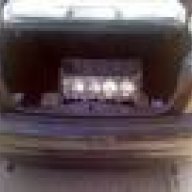 Jesse, from Sardinia... I think I bought a hood and bumper from you!

My 98 had the same problem with sediment. Our water really does suck!
OP
OP
B

twovalveterror said:
Jesse, from Sardinia... I think I bought a hood and bumper from you!

My 98 had the same problem with sediment. Our water really does suck!
Click to expand...

The very same! Hows it going man? Ever get all those parts put on? I regret getting rid of all that stuff... but got tired of moving it around! Car looks good in the sig though!

gave the hood to my brother, as he was having clearance issues. and matching paint or not, that bumper is going on this summer! a recent trip to Pittsburgh left a mysterious patch of missing paint on my current one anyways.

Nice work man. 240K is insane. Your front main seal drip at all or nah? Mine does at 56k
You must log in or register to reply here.