My car in valvoline garage used for sound in commercial, pics

Sorry bout the weird ass title.. didnt know what else to call it.. damn i havent been here for a while and i miss it!!

anyway.. as some of you might have already seen the valvoline commercial with the red SN95 Cobra, well the sound that car is making, is not really it's sound

They used my car for sound and used his car for the vid.. here are pics from that day

sweet! I havent seen that one yet though ???
D

Are you serious? How did you land that? I saw the comercial I was pretty excited because you dont see many sn95s on TV.
Q

Me, being myself said i'll race the guy to make up the final decision lol but they said no.. it's okay.. we need an older car to show that our oil will help older cars last longer

So anyway, with that being said.. they loved my mods but the problem was i had an H-PIPE and they wanted an X-PIPE so i went to my muffler guy and told him the situation

I owe it all to my car, she deserves the fame O0
R 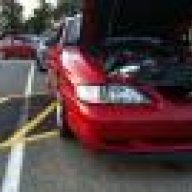 I hope I get to see the comercial!
1

maybe they would have used your car if you had centercaps.... ;D


congrats...i wanna go find a vid off that commercial on the neet.*goes off the youtube*
9

I obviously wont get to see it, sounds like you had a fun time.
S

Thanks everyone, i hope it ends up on youtube also, but i'm going to be getting the DVD from that day plus the other cars they used for their other commercials so i'll rip it and post it up if anything O0

Saw it last night and it is an awesome commercial. I was yelling at everyone in the room to shut the hell up and they all think I am nuts but your car sounds bitchin man. Too bad they couldn't use your car for the shoot but at least they used another sn95.

i saw the commercial, but my fackin volume was down and before i could turn it up it was over...and that red cobra they used wasnt anything special.

I want to see this, is it not on Youtube or anything?
Q

The red cobra was alright.. his exhaust (no offense if he sees this) didnt sound good AT ALL to me...

I just sat in mine and gave it a few revvs.. then did one WOT revv and hurt the guy's ears that had the earphones on O0


DFG_Pimpin said:
i saw the commercial, but my fackin volume was down and before i could turn it up it was over...and that red cobra they used wasnt anything special.
Click to expand...

I saw the commercial, pretty cool. Too bad they couldn't use your car
Q

yeah, it would've been badass :bunny3:

your car has it where it counts, sound and looks. :banana:
You must log in or register to reply here.