Pi cam on NPI or other cam?

Basically Im staying with npi heads and plan on going pi intake/ pi cam...should I go with the pi cams that I can get for 75 bucks or should I try and go with some other cam?..is there even any good npi cams out there?
T

i think i'm in the same boat as you. i've found aftermarket nPI cams with identical specs as aftermarket PI cams. like i was just told in my thread about this subject ported nPI heads or PI heads would be better for aftermarket cams. i wouldn't see a point in going ny forther than stock PI cams on un-ported nPI heads.

i hope someone way more knowlegable than me comes in and can clear it up. for the both of us. lol
F

Well Cams arent gonna do much ifyou still have the npi heads.
L

PI cams were worth 10-12 rwhp for me on the dyno. If you can pick them up that cheap, I would go with them if I were you plus you can use the stock springs and save the cost and aggravation there during the install.
F

Oh yea for 75 bucks its def worth it, I didnt see that part, but its gonna be alot of $$$ to install them
J

well i have been quoted 165-195 for the pi intake install, and 180 for the cam install..I thought that was a fair price for getting it done right.
9

well im 18.and have no experiance with these engines..I could probably get by on the intake..but no way on the cam..I would rather just pay and get it done all at once.
F

I'd say go for it then. Sounds like a good deal. Then all you'll need is some heads 8)
1

the intake is sooo simple...but if you are doing the RTV thing you have to let it sit for a day after so the RTV can harden up.
A

PI cams were worth 10-12 rwhp for me on the dyno. If you can pick them up that cheap, I would go with them if I were you plus you can use the stock springs and save the cost and aggravation there during the install.
Click to expand...

Fets said:
I'd say go for it then. Sounds like a good deal. Then all you'll need is some heads 8)
Click to expand...

or you can port the nPI heads and make just as much as the full PI swap
PI Intake, ported nPI heads and i believe PI cams (or if what you said is true about the nPI cams with same spec) make the same amount of power as PI Swap from what ive been told
Q

way off topic bros but his pm mailbox was full


Yo this shit is weird man, i know your playin ball and shit now so we wont get to bop for awhile but ill tryn find time. I ended up yelling and nick gobble and nick gat about how they make up shit and how they get there stories all retarded. So i guess they dont like me anymore but i dont really care about them because alota reasons. One main reason is everything we talk about and our cars and stuff they have fuckin izuzus and for rangers and they think they know everything. I yelled at you and dalls when it shoulda been the nicks. I got my car fixed and tuned for the track. We ended up break the maf and some other shit. Another problem was the bottle had all the old nitrious in it which proally caused the backfire. We got this sweet purge kit that at night it lights up blue when the nitrious comes out. I donno its just weird cuz its not the same anymore. Im tryin to get a better job this summer to so if you have something in mind i wouldnt mind working with ya. That be nice if brandon hired us at his shop this summer. Alright i gotta go to work but ill talk to u soon peace bro 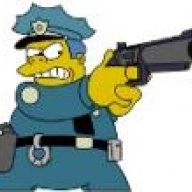 go to the book store and get the book Building 4.6/5.4L Ford Horsepower on the dyno. It is by Richard Holdener. You will not regret buying this book. I look at it about every other day.
In the book he did test a set of comp cams xe274h and they picked up around 50 horsepower on the engine dyno over the stock npi ones. That is the ones I am going with. They will sound good in the car also.
You must log in or register to reply here.

PI Heads - What to look for