Was your Sixer you first car?

Just interested to know how you started the Stang scene...

Myself, I took the reverse-common-sense approach - bought my sixer in June '03 and started modifying it slowly. Now it's not so slowly, but I should have a different daily driver after I graduate in April. :dancing6:

A V8 Mustang is in my future, but I'm gonna build my sleeper up first. :slap:

How about you?
B

what do you have done to your car?

no the first time I got a Mustang was for my Graduation present 10 years ago this year ;D ;D it was a 96 V-6 with all the buttons and stuff before that I had 2 ford rangers
G

BAB98mustang said:
what do you have done to your car?

What do I have done? Let's see... imp2: M90 conversion (which I was hoping would get done today), SCT tune, 3.73 gears, Steeda Tri-Ax, ported lower intake, 17" Mach 1 rims in the basement for the spring, some styling stuff like Cervini Ram Air hood, clear corners, Mach 1 chin spoiler, some audio stuff, T-Lok (on order as of about 20 minutes ago), strut tower brace being in ordered this week, and lots of random stuff.

You can check out my website for all the details and some pics if you want. 8)
S

First car was a 66 Rambler American 440. It was a little 2 door coupe, had a 232 in straight six. Only straight pieces of sheetmetal were the doors. Someone had danced on the roof

The two things I loved most about that car was:

1: In a stop light to stoplight, I scared the [email protected] out of most of the tricked out cars (Mustangs and camaros) because coming off the line, they'd be smoking their rears and this little POS would just hook up and go. Now once the other car caught traction and if the run was more than a block long, My hat was handed to me without a doubt, but it was fun making the guys sweat. ;D

2: The other thing that made the car a lot of fun was there was a bar under the rear seat you could pull out and moved the the bench seat all the way forward. The backs laid down and instant bed. I'll leave the rest to imagination.

Those were the days.
J

well my first car was a truck for the first week i was driveing then my dad bought me my 95 v6 mustang its getting modded slowly but some day i want to convert it into a 5.0
W

im 17 and yes it was and im very pleased with it by the way anyone know about the mac y pipe bolt on and how it sounds?
1

my first car was a 95 v6 virtually stock, hence the username i use everywhere, even if i just joined recenly(keepin it simple)...but im glad i upgradded to the GT,
9

yea it is my first car. so far im happy with it.

and if you would want a real good exhuast get a H-pipe and a aftermarket cat-back or GT take offs. i have a MAC H-pipe and GT take offs and theres a lil difference in it.
P

Mustang is my fifth car i'm 20

and now I have my stang.. I still have the monte carlo and asuna sunfire as well though.
B

I got the Stang shortly after I turned 18 as my third car.

First car was a 1989 Chevy Beretta GT talk about a car with NO aftermarket.... But, I dropped everybit of $3500 into a car worth $800. When I got rid of it I was notorious in the Beretta world and had people as far as Puerto Rico, and Canada begging me for my suspension setup months before I sold the car imp:

Second was a 1989 Mazda B2200 kick-up truck I got from my Grandpas estate when he died. When I got the truck the engine was sitting across the yard, no trany, driveshaft, etc. I tore out the interior, reinstalled the motor only to find that the head was warped :lame: So instead of buying a new head (off of a Probe GT, and goingthe fuel injected turbo route... mmmm Turbo truck.....) that was about the time my neighbor told me he would sell me his stang.

Now for the Stang, my neighbor must have spentevery bit of 2-3 years trying to sell me this car, one night I finally asked him how much, and when he told me I immediatly began to get my money together. I sold several hundred dollars worth the parts I had purchased for the Beretta, and truck, sold the truck, and made arrangments for the Beretta. I picked up the Stang in March of 06.
P 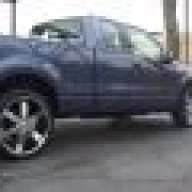 My 1st car was a 1984 notchback v6 that had an oil leak from the valve cover that dripped on the header that left a trail of smoke like spy hunter. But hey I was 17 @ the time and had my own car. I sold the 84 V6 and bought a 86 V8 ago 1yr later, man I luv-ed that car. It was ahead of its time. Was black and my sister boy friend @ the time sold me some 15" deep dish Boyd wheels my junior year in high school and for a grad my father put a good chunk of money down for a brand new 95 v6. Needless to say I became the most popular guy in the school over night.
B

Im 17 and the sixer was my first car and i will always own it. Along with my sixer i got a 92 ranger around the same time for my winter and dd. Since fall i upgraded the ranger to a v6 dakota. Then later this summer hopefully the parents will help me pick up a 96 mystic cobra and ill have my second pony in the stable :banana:
A

haha yes! theres actually an option for me!

i had the little 4banger before this. it was a notch, so i had a tough time gettin rid of it though

My first ride wasa 88 chevy Baretta 2.8l v6. Hell you probally dont know what that is.
A

my buddy had a beretta... it kept breaking... so he bought a corsicrapica :santa_rolleyes:
I

much nicer now if i say so my self